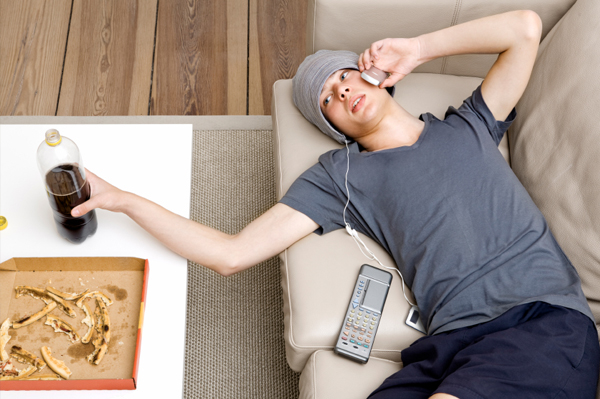 While the correlation between school and unhealthy habits is widely known among parents of sleepy and irritable teens, the teachers disciplining short-attention-spanned pupils, and the students themselves who can’t seem to feel content nor alert, it can be difficult to understand to what extent to which one engages in detrimental habits; it is often difficult to identify it in our own lives, even if we are aware of the habits at face value. The most detrimental habits that stem from the constant cycle of school work are lack of sleep, ruinous diets, and procrastination.

Many teenagers can find themselves in a loop of losing sleep every night. It is recommended for teenagers to average 8-9 hours a night. However, many teenagers’ actual sleep pattern show an extreme deviation from this number. Only 15% of teens achieve this number each night; the number of hours of sleep teenagers often get is less than 7. This disparity can be accredited to late nights spent doing homework for rigorous classes after a day of extracurriculars, or a last resort from procrastinating. While this scenario can feel like a coerced practice, some teenagers voluntarily stay up late, often watching Netflix or scrolling through Instagram and Twitter. This causes extreme fatigue during the school day, throwing off the biological clock if the cycle continues. This fatigue can lead to decreased concentration and increased irritability.

In addition, diet poses an adverse concern for the majority of teens. Many teenagers skip breakfast, snack on highly processed foods throughout their classes, only to go off-campus to get fast food for lunch, and have an overly indulgent dinner. Skipping breakfast disables the metabolism from beginning in the morning, which can lead to weight gain and potentially obesity. Highly processed foods are abundant in sugar, fat, and salt, over-consumption of which can cause an addiction similar to heroin addiction. In students, as well as in the majority of Americans today, fast food plays a prominent role in meals, in which the fat content equates to calories adding up quickly. Many teenagers are not aware of the lack of essential nutrients that comprise their diets, an amalgamation of caffeine, vending machine snacks, and fast food. Often, these choices are made for convenience or cost-efficiency, or just for a boost throughout a tiring day, but these ultimately detriment the health of developing teenagers.

Once these students finally get home after a long day, it’s often tempting to spend the afternoon scrolling through social media or catching up with friends. This often relegates schoolwork to the last part of the day, which can lead to less sleep and lower grades, not to mention the stress that inherently intertwines with all-nighters or not being prepared for the following day. These scenarios stem from widespread procrastination on social media or Netflix by teens. These constant stimuli lead to isolation and disconnection from reality and often lead to self-comparison with the supposed “glamorous” lives of others, broadcast for all to see–and evoke feelings of inferiority when their lives don’t match up to these fabricated and exaggerated social media existences. These sorts of thoughts cause a myriad of mental illnesses ranging from depression to eating disorders. Clearly, procrastination, while fun at the moment, does not amount to any worthwhile results.

In conclusion, students take part in many detrimental habits to their physical and mental health, including losing sleep, eating egregious diets, and giving in to the temptations of procrastination. While teenagers often don’t see the harm in their acts, they must be identified and ameliorated to create healthful habits as they enter adulthood.