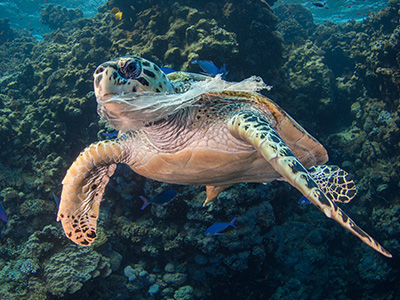 Everyone’s seen them–crawling over their Twitter feeds at inopportune times, haunting their Starbucks purchases, manifesting randomly on Instagram hashtags. Everyone knows them, and many fear them.

Plastic statistics and the accompanying and assorted information on climate change, coral reef decimation, and deforestation are just one hallmark of our modern age. They are also distinctly terrifying. We see an article pop up on our Twitter urging us to take action against plastic pollution and cringe away with guilt and helplessness. On the opposite end of the awareness spectrum, we have the wild VSCO girl; flexing her metal straw and iced coffee, sheathed, ironically enough, in unrecyclable plastic.

With the rise of public awareness concerning plastic pollution, production, and recycling have come a cavalry of tags: among their numbers #noplasticstraws, #recycle, and the infamous #savetheturtles. Unfortunately, no amount of tagging and armchair activism is going to cause any actual change–at least as long as the same people who tout their own environmentalism aren’t voting for environmentally-friendly candidates (or at all), supporting and endorsing corporations who use fast fashion and slave labor as business models, and dropping their iced almond-milk latte cups by the wayside. With current American leaders ignoring climate change, rescinding positions in global climate change agreements and even going so far as to publicly endorse plastics productions plans, public push-back is more necessary than ever to keep the detrimental results of plastic pollution at bay.

Consider the following:  Eight million metric tons of plastic are dumped into the ocean annually, with one garbage truck full of plastic being offloaded every minute. By 2050, plastic is set to outweigh the fish in the sea (Earth Day Network, 2018). This once most beautiful and beloved frontier of the Earth is quickly becoming a communal garbage can.

It is, of course, necessary to take into consideration the massive corporate impact on plastic production. Anyone who’s ever used a product from Costco or ordered a package from Amazon can testify to the excessive amount of plastic used in shipping and packaging. Purchases as innocent as ice cream in a waxed-paper cup can have long-reaching effects on the environment. Clothing brands like H&M and Forever 21 sell cheap clothing made from plastic-based polyester, with factories that pollute local water supplies and exploit the local labor force, and often throw away vast quantities of overstock clothing. Not to mention the estimated 6% of global oil consumption used in the production of plastics, which adds the insidious figure of carbon monoxide and carbon dioxide emissions to the already complicated equation.

Obviously, this is a problem that is not going to be solved by an absence of plastic straws, not a concept that is readily grasped by some. If you’re going to continue over-consumptive habits, then at least don’t make light of the small, gratuitous good habits that you do possess and call yourself Mother Earth’s lost child. In fact, considering the bulk of the problem, it’s downright asinine to act as if you’re the single-handed savior of the turtles for not asking for straws.

This problem is a far deeper one than most want to acknowledge, but change will never arrive if the public isn’t informed. In the meantime, write your representatives, vote if you’re of age, and skip the drive-through. Homemade coffee tastes better anyway.