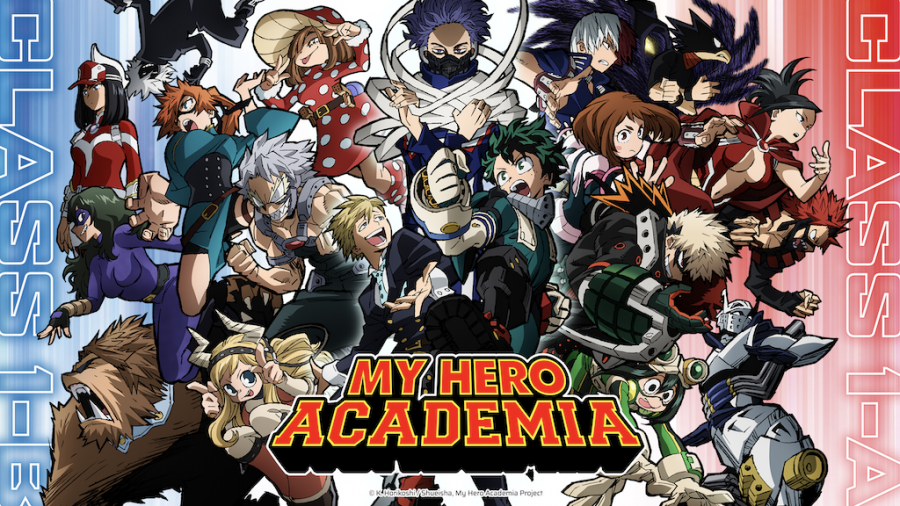 Disclaimer: As of when this was written, only 6 episodes of MHA Season Five have been released. This is a review of the episodes released so far.

Season 5 of My Hero Academia officially began on March 27th, 2021, and has been airing weekly since. Back in December, I made a review on the first four seasons of the show, and now that a decent amount of the fifth season has been aired, I have returned to share my thoughts on the season so far. Because the entire season has yet to be released, the review standards will be different. This time, the ratings will be based on each of the six episodes that have been released, alongside a few other elements.

Warning: This is a review of Season Five, so obviously, there will be spoilers, so if you’ve invested yourself into the anime but aren’t caught up all the way, then click off and go catch up, unless you don’t care for spoilers, then feel free to stay. But don’t say I didn’t warn you.

One thing that I’ve always loved about My Hero Academia was the sound, especially the music. Season Five is no different, however, neither the opening song, “No. 1”, nor the closing song, “Ashiato”, have caught my attention too well. I do think they’re both lovely tunes, I just prefer other openings and closings to these ones, such as “Peace Sign”, the first opening for Season Two, and “Starmarker”, the second opening for Season Four. If the pattern that’s been occurring since Season Two continues, then as the season continues, a second opening and closing song are to be expected. Perhaps by then will my opinions have changed.

Another thing that I have always loved about My Hero Academia would be the characters, and the new season doesn’t disappoint. Season Five gives the viewers a better glimpse of Class 1-B, a class that has been more set to the side as the show focuses on Class 1-A, where the main character, Izuku Midoriya, is in. Certain students from Class 1-B have stood out in the past, however, such as Tetsutetsu Tetsutetsu (yes that’s his real name), an enthusiastic character not too different from Class 1-A’s Eijiro Kirishima, Itsuka Kendo, Class 1-B’s class representative who has been considered the “glue” of the class and keeps the class from falling to shambles, and of course, how could I possibly forget about Neito Monoma, who takes every chance he can get to belittle the other class, despite knowing full well that he’s not doing much better.

Season Five has given us a chance to get to know all three of these characters and more, though so far none of them have made much of an impression except for the three mentioned before, Ibara Shiozaki, a girl with the power to manipulate vines that grow from her hair, whom I remember from Season Two during the school’s Sports Festival, Shihai Kuroiro, a boy with the power to merge into anything dark in color, such as shadows, and Kinoko Komori, a girl who can sprout fungus spores practically anywhere. Not much is known about the latter two quite yet, however, Kuroiro seems like a strong character that will be hard to defeat in the future, and Komori seems nice and skillful from what I’ve seen from her and I hope that we’ll see more of her in the future. As for other students, we have yet to see them in action, but hopefully, that’ll be showcased in later episodes.

We also get to see more from Class 1-A as well. So far, I’ve seen improvements in characters like Fumikage Tokoyami, whose power gives him control of a shadow monster he calls Dark Shadow. Tokoyami has always been a strong character, having shown that in the Sports Festival, but this arc, known as the Joint Training Arc, has allowed him to showcase his improvements since then. Toru Hagakure has also shown improvement throughout the series, as her strengths have improved tremendously since I last remember seeing her in combat.

Class 1-B isn’t the only one that gets more of the spotlight in the show. We also get to see more of Hitoshi Shinso, a student from the General Studies department, Class 1-C. Shinso’s power allows him to brainwash anyone if his target verbally responds to anything he says, but it only works if he wants it to. We’ve seen quite a bit from Shinso throughout the anime, having participated in the Sports Festival and having shown up here and there, but it isn’t until this arc that we truly get to see him in action. So far, he has had some issues adjusting, having had to deal with inexperience compared to the other students, but so far we’ve seen Shinso help his team win in combat, hinting that he is increasingly improving. This arc also stands as a test for him to see if they could possibly move him up into the hero course, but whether or not they actually do will have to be determined later on in the season.

Overall, the ensemble of characters in this season has grown, and hopefully, the anime will continue to let them shine, not just in later episodes, but in future seasons as well.

The season kicks off with the first episode, entitled “All Hands On Deck! Class 1-A”. Although this episode is mostly filler, as most of the episode contains Class 1-A practicing some hero rescue drills, it’s still a nice little way to start the season, and honestly, it was fun to see upperclassmen Mirio Togata, Tamaki Amajiki, and Nejire Hado, also known as the “Big Three” of the school, get involved, the latter two pretending to be villains whereas Togata acted as a civilian in danger (and stayed oddly calm while doing so). Overall, in spite of the episode being filler, I still enjoyed it. After all, you can’t go wrong with watching Class 1-A trying to stop the “villains” while also trying to save Togata as he calmly floats down the river.

The second episode, “Vestiges”, focuses more so on a sort of redemption arc for Endeavor, now the number one hero in the world since All Might retired, as well as a new feature and some answers to the questions that Midoriya’s mysterious Quirk provides, which All Might had passed on to him at the beginning of the series. This episode isn’t technically filler, however, I do find the episode rather slow-paced and kind of boring, however, the episode is also needed to establish character development for Endeavor and give Midoriya some more development in his Quirk.

In Episode Three, “Clash! Class A vs. Class B”, the episode starts off slow, however, the pace starts to pick up later on as Class 1-A and Class 1-B meet up for their Joint Training Battles. In this episode, we get to see more of what Shinso can do and how he’s improved since the Sports Festival. This episode also showcases the entirety of Class 1-B (or at least gives us a rundown of who’s who), which is appreciated. The first battle also begins in this episode, where we’re able to see a glimpse of the skills of the students involved. Overall, the episode is a lot of fun, especially with Monoma trying to belittle Class 1-A and get under their skin as usual and with Class 1-B’s overall enthusiasm.

The fourth episode, “Make It Happen, Shinso!”, allows for the students in the first battle to showcase their talents even further. This episode, in particular, was an enjoyable one, as it allowed the viewers to see the skills of the students, especially Shinso, who we haven’t seen in combat since he fought against Midoriya during the Sports Festival. Each of the students gets a chance to showcase their abilities, and despite Shinso’s inexperience in combat, especially in a team, he manages to pull through and help Class 1-A to take the win with the help of some quick thinking from Tsuyu Asui, whose power gives her similar attributes and skills as a frog, and Denki Kaminari, who has the power to manipulate electricity.

Episode Five focuses on the second battle between Classes 1-A and 1-B, where even more students are able to showcase their talents. The beginning is a bit slow, as this just goes over the results of the first battle, but things pick up as the second battle begins. This episode is where we get to see the strengths that Kuroiro has to offer with his shadow merging powers as well as some character development and power improvement for Tokoyami, who had come from a work-study with Hawks, the current number two hero. We also get a glimpse of the strengths in power that Komori has, however, we don’t get to see it in its full potential until the next episode. We also get some light bits in this episode as well, such as Bakugo and his typical “I can do it myself!” attitude, Class 1-A’s Yuga Aoyama being flown around by Kuroiro as he’s trying to capture him and screaming the whole way, and Class 1-B’s teacher, Vlad King, providing biased commentary while Class 1-A students try to stop him from giving that biased commentary.

The sixth and final so-far-released episode finishes off the second Joint Training Battle, where not only do we finally get to see Komori’s powers being used, we also get to see improvements in both Kendo and Momo Yaoyorozu, who has the power to utilize the stored fats in her body to create basically anything non-living as long as she knows the chemical compound of what she’s trying to create. I was worried that each fight would contain more or less of the same thing, but so far the two fights have been quite different from each other, with each character bringing different things to the table of fighting. This battle also differed in terms of the outcome; while Class 1-A had won the first battle, the second battle ended in a victory for Class 1-B, to Vlad King’s delight.

Overall, the season’s off to a great start, and hopefully, we’ll be able to see more of Class 1-B as a whole in the future. The next battle will feature Class 1-A’s Shoto Todoroki, who can control fire and ice, Tenya Iida, who has engines that give him the ability of super speed and powerful kicks, Mashirao Ojiro, who has a tail that he utilizes strongly in combat, and Mezo Shoji, who has tentacles that have the ability to replicate any other body part that has better efficiency than the originals. Together, they will be up against Class 1-B’s Pony Tsunotori, Sen Kaibara, Juzo Honenuki, and Tetsutetsu. With the exception of Tetsutetsu, I’m not entirely sure what powers nor strengths they have, however, I’m anticipating that they’ll be great in combat, but only time will tell. Personally, I’d like to see what everyone else in Class 1-B that I have yet to see much of can do, and I’d also like to see just how much Class 1-A has grown in terms of power and strength. I’d also like to see how Shinso has improved and learned from his first battle and how he may be able to apply that experience to the next one. But until then, only time will tell how things will be in this upcoming season!