***FULL DISCLAIMER THIS ARTICLE WILL 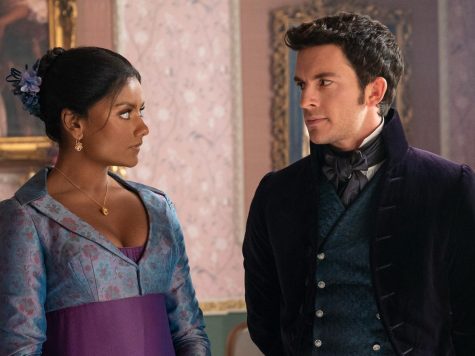 HAVE SPOILERS FOR BRIDGERTON BOTH SEASONS***
General Overview of the Season
Bridgerton season two came out March 25th and it was amazing. The second season is based on the second book in the Bridgerton book series by Julia Quinn. The second book follows the eldest child of the Bridgerton bunch, Antony. The season starts by following Antony interviewing the women that he and his mother believe may be a good fit for his wife and the role of viscountess. After interviewing each girl he decides that he will simply marry the girl the queen declares the diamond of the season. After that, we meet Kate when she is on her morning ride, one of the only things she does for herself we learn later on, and they end up talking and when Kate leaves, Antony is smitten. Flash forward to the night of Lady Danbury’s ball and Kate’s sister, Edwina, is declared to be the diamond of the season. Antony dances with her but Edwina states that any man who wants to marry her must obtain the permission of her sister. Antony realized that Kate was Edwina’s sister and that he will have to work to get her permission because earlier that night he has said to a few gentlemen that he only wanted to marry a girl who would do her duty as viscountess and that he wasn’t looking for love. Unfortunately for Antony, Kate overheard and she told him that he will never be trusted to marry her sister or anyone else since he is messing with the emotions of young impressionable women. The show has many classical renditions of popular music such as Material Girl by Madonna, Sign of the Time by Harry Styles, What about us by Pink, You Oughta Know from the musical Jagged Little Pill, and many more.
Season Two Review
The story has many parallels to the Pride and Prejudice 2005 movie and the 1995 TV. series, so it was exciting to see some of my favorite scenes from Pride and Prejudice with some of my new favorite characters. This season, in my opinion, is much better than the first season, one reason is that it doesn’t have as much sex in the show as the first season did. If you are deterred from watching the show because of a lot of sex scenes, I would recommend watching only the second season which only has two sex scenes, one in the seventh episode and one in the eighth episode, unlike the first season. The beauty of this show, at least so far, is that each season can be watched by itself, for they each follow a different storyline. Sure, you might be confused about a few scenes and characters but in general, they can be watched independently of each other.

After watching all of Bridgerton season two in a day I quickly realized that this TV series is going to be one of my favorite shows. I had read the books before I watched the show and, in my opinion, the show was much better than the books. The show details the characters in a way that gives them more depth than they have in the books. The books do have more cutesy moments than the show but the show follows more characters and gives each character a personality and a back story. Overall, I’d say that the show is worth watching if you are into period shows that have romance and are a bit dramatic.